I was reliably informed that our second day in Maranello was all about cars and to basically tag along and not complain about being bored.

We drove out to a small town about 30 minutes from Maranello called Sant’Agata Bolognese, the home of Lamborghini. Here we looked around the little museum and had a guided tour around the production line of the Lamborghini Aventador. To make it less boring I tried to imagine I was Gemma Arterton in ‘Made in Dagenham’ and wondered if the skilled jobs making the seats (done by women) was as well paid as the mens skilled jobs (putting some screws in pre drilled holes). I learnt a lot about car production but I still can’t get my head around the fact they make 4.8 cars a day there but it still takes the garage a whole day to do an MOT on my Fiesta! 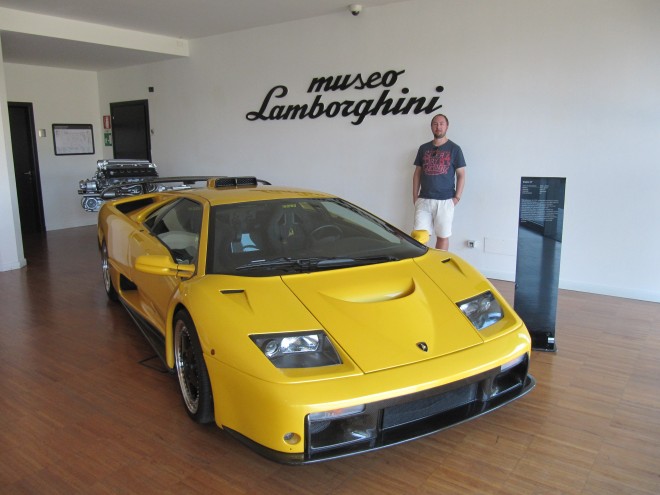 A man next to a car

A shortage of food establishments in the area meant that lunch involved sitting in the car eating ham, cheese and some biscuits and crisps from the local Conad supermarket. There’s something about foreign supermarkets that are so much fun, I can’t go past one without going in and buying something!

In the afternoon we headed back to Maranello to the Ferrari Museum, which I was thrilled about obviously. No factory tour this time, you have to own a Ferrari for that to happen, but we looked around the museum and saw some more cars, (mainly red ones). My favourite this time was the little blue one they made on the side which they pretended wasn’t a Ferrari – but I would buy this any day. 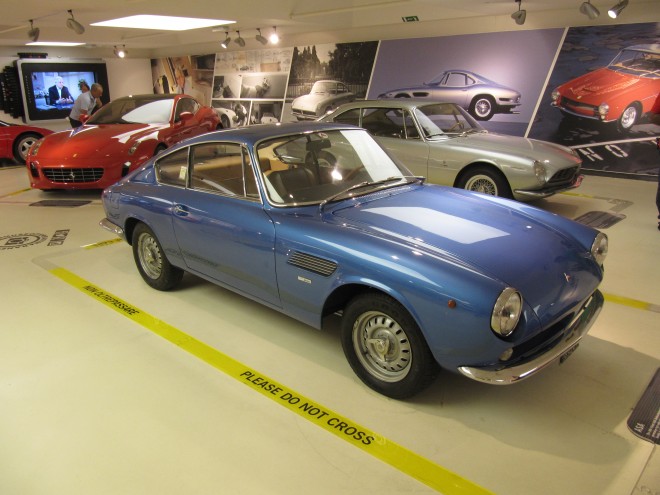 Things then took a turn for the expensive. My Creative Director / Racing Driver found out that all around the streets of Maranello are companies with several Ferraris and Lamborghinis that you could pay to drive. Once we’d been to a few different companies he eventually haggled a decent price and off he went for a 35 minute drive into the hills around Maranello in a Ferrari 458 Italia (whatever that is). I stayed in the café praying he didn’t wreck £200,000 worth of supercar as any damage you cause you have to pay 10% of. Eventually he returned and to my relief had avoided any mishaps. He seemed to enjoy it too. 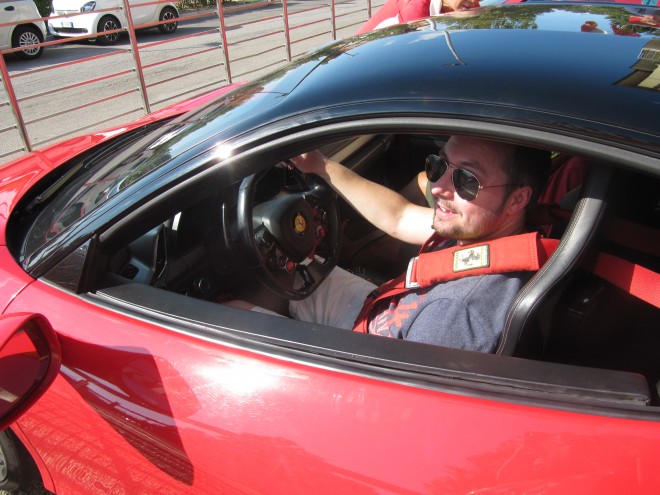 Man in another car 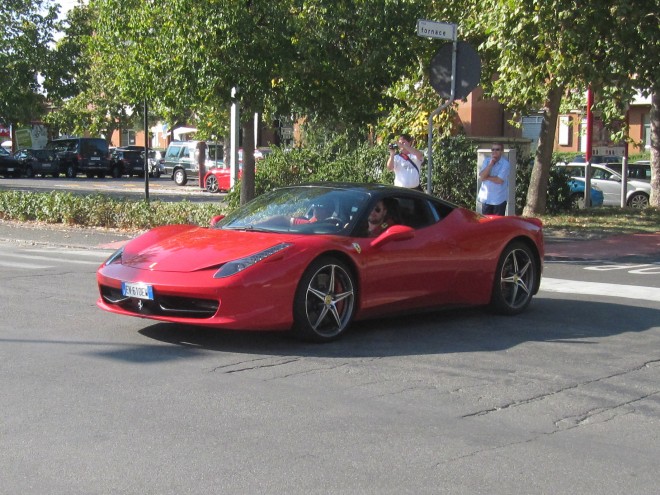 Once he’d had enough of the Ferrari-ness we went off to find our Pizzeria recommendation – Pizzeria La Bufala, just of the main road. Again, quite an unassuming looking place but this restaurant has won awards for it’s pizza and once again we were not disappointed. We ordered a cheese, pear and cinnamon pizza with a ricotta stuffed crust and also a ham, sausage and tomato pizza and then split them between us. It was hard to choose which was the best but we did agree that if we ever came back to Maranello, we’d eat here again. 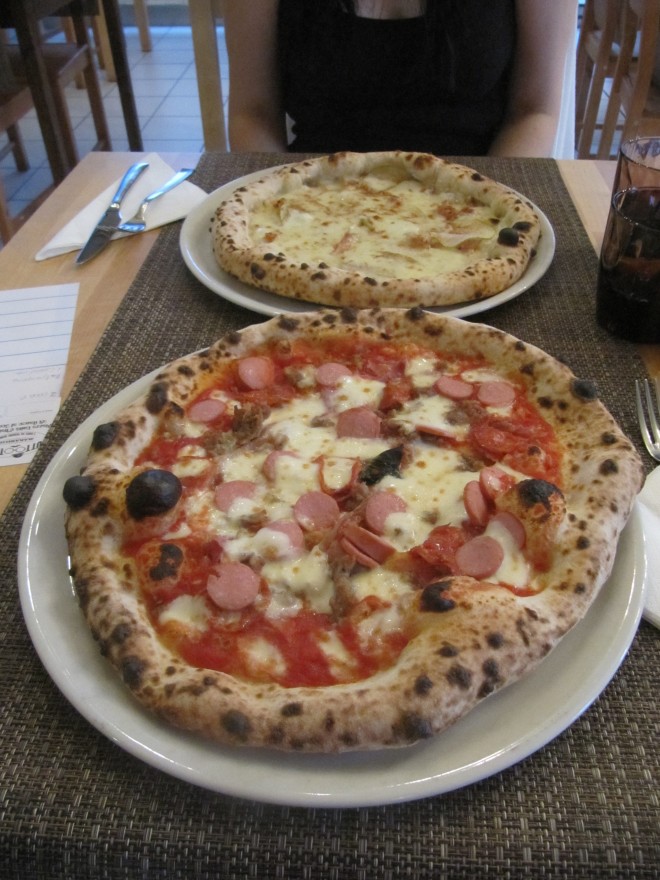 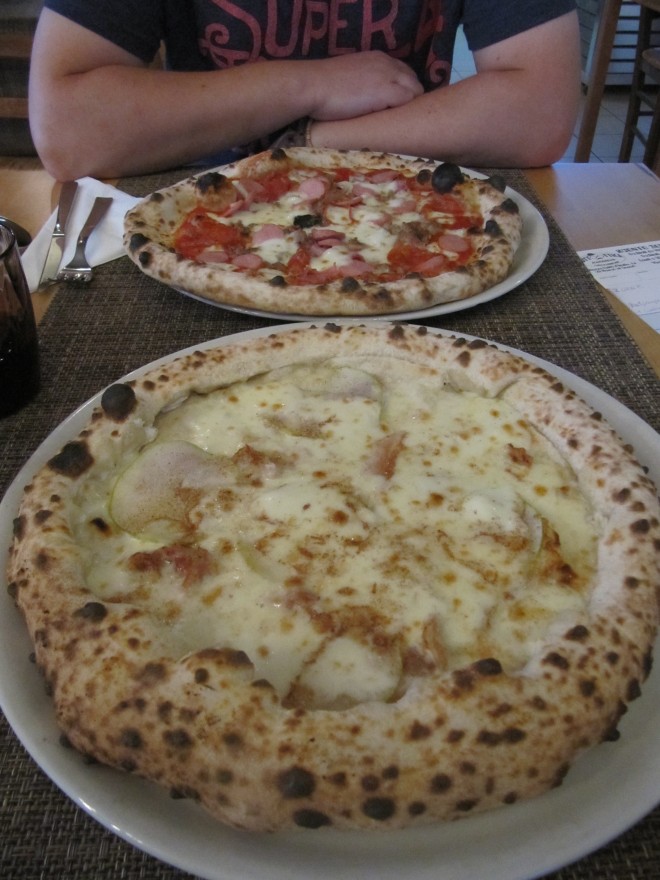 The following morning we got up early and checked out of the hotel and drove through the Modena rush hour to a Parmigiano Reggiano cheese dairy where we had arranged a tour. Again we were quite lucky that the other people on the tour were late so we had another private tour with a lady called Pamila.

Once we were suitably dressed in our CSI: Cheese outfits we were shown all the different processes of making Parmesan cheese. We were able to taste some of the different ages of cheese, plus some locally produced meats and even a glass of wine – at 10AM!!! Needless to say I wasn’t about to do the 3 hour drive down to Tuscany that followed. 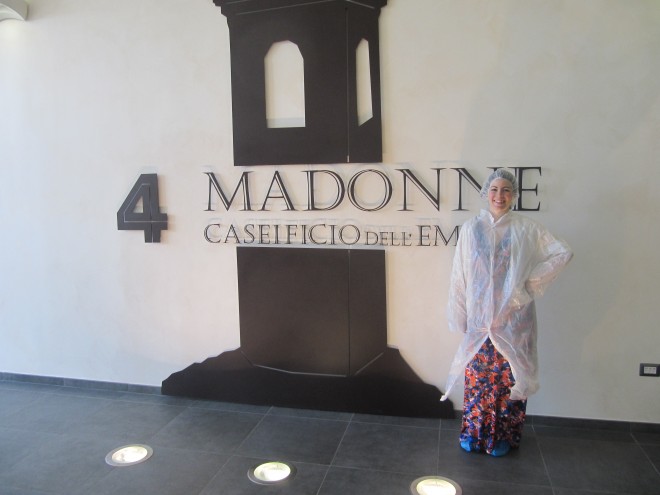 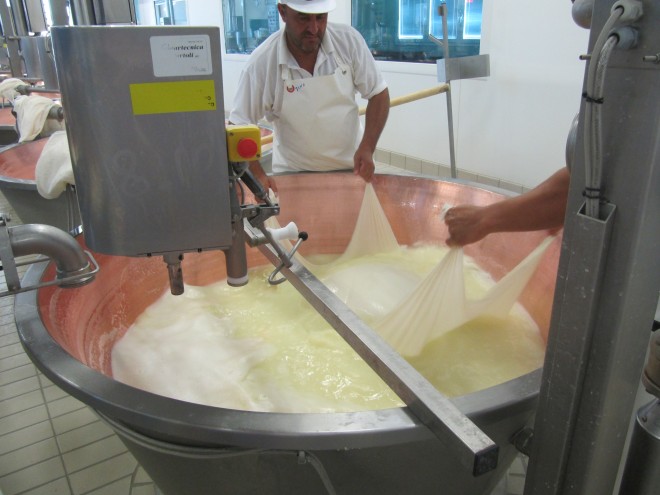 Lifting out the ball of cheese 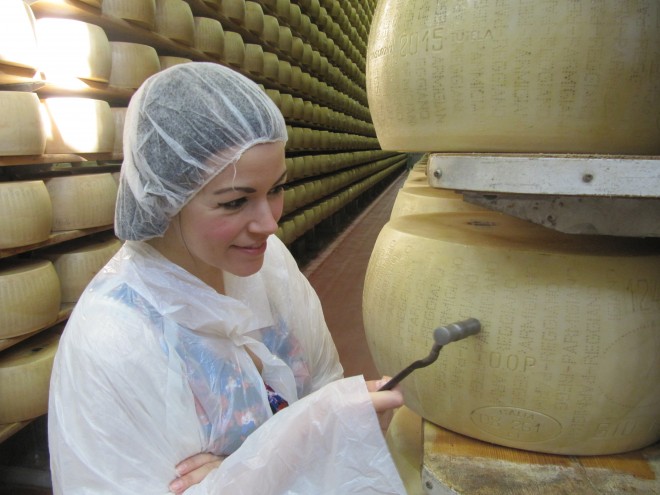 Testing the cheese for age 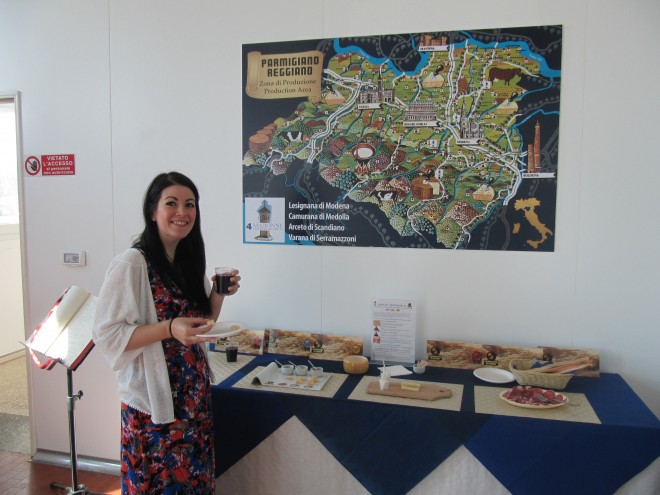 Cheese, meat & wine – all for breakfast!