Following the closure of the Summer Baking Window in August, Cakemole took a well deserved holiday. But Cakemole being Cakemole, not even a holiday could stop me from taking an interest in all things food and drink related!

Back in April, my Creative Director / Chief Taster / Travel Agent booked a trip to Italy for us both. I had always wanted to go to Venice and Tuscany but my Travel Agent informed me that the two were over 300km apart and so not ideal destinations for the same trip. However, he said that if we hired a car, we could drive from one to the other with a stop off halfway that took his interest a bit more (more on that later). 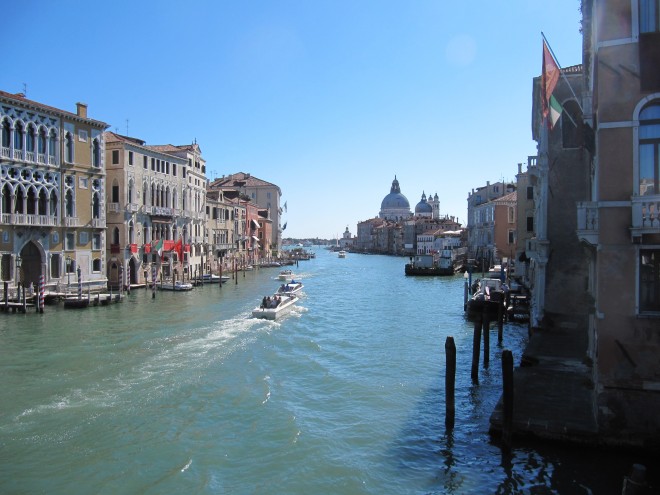 The official cocktail hour drink of Venice is Aperol Spritz, a mix of Prosecco and Aperol served with ice (and an olive, if you are lucky). As soon as we arrived I saw people drinking them, so within about 10 minutes of dropping our bags off I was also drinking one, and eating a slice of pizza, by the main waterway. 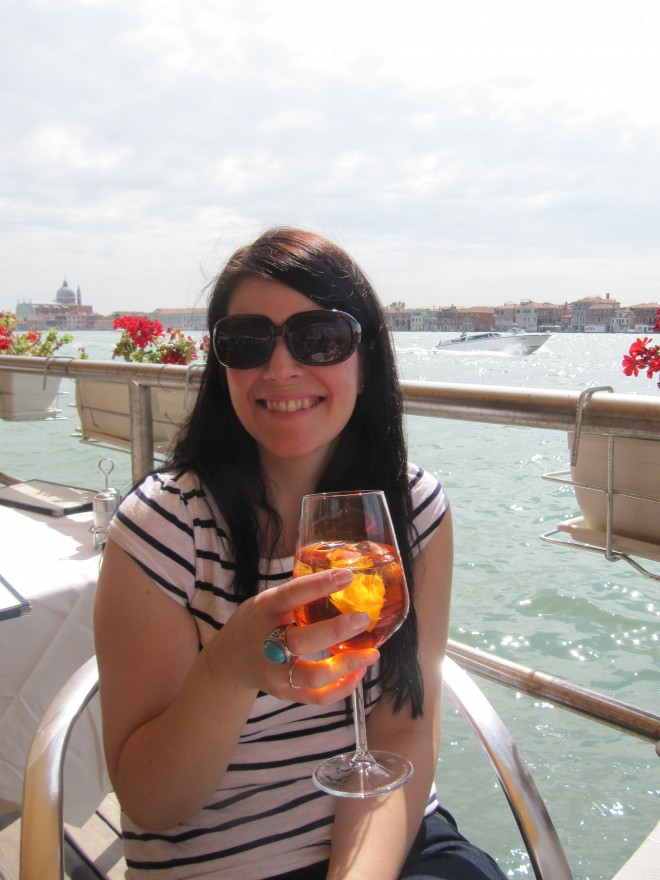 I’d read that the best way to eat in Venice was to get a bit lost off the beaten path and find a restaurant that was less touristy and so we stumbled upon Pane Vino e San Daniele near Campo San Barnaba. The restaurant was small but lively and it seemed we turned up at just the right time to get a table as while we were there several groups and couples were turned away. 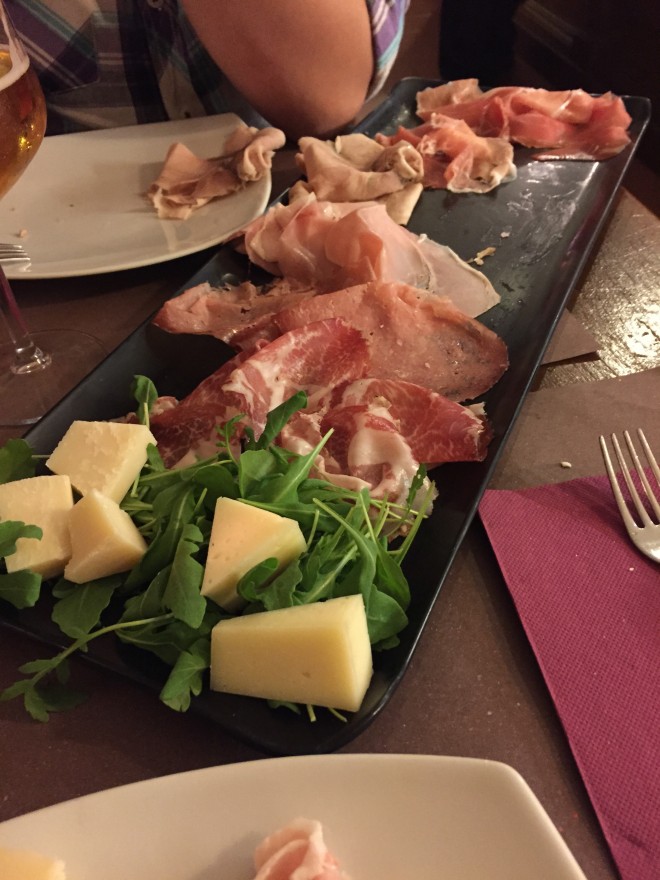 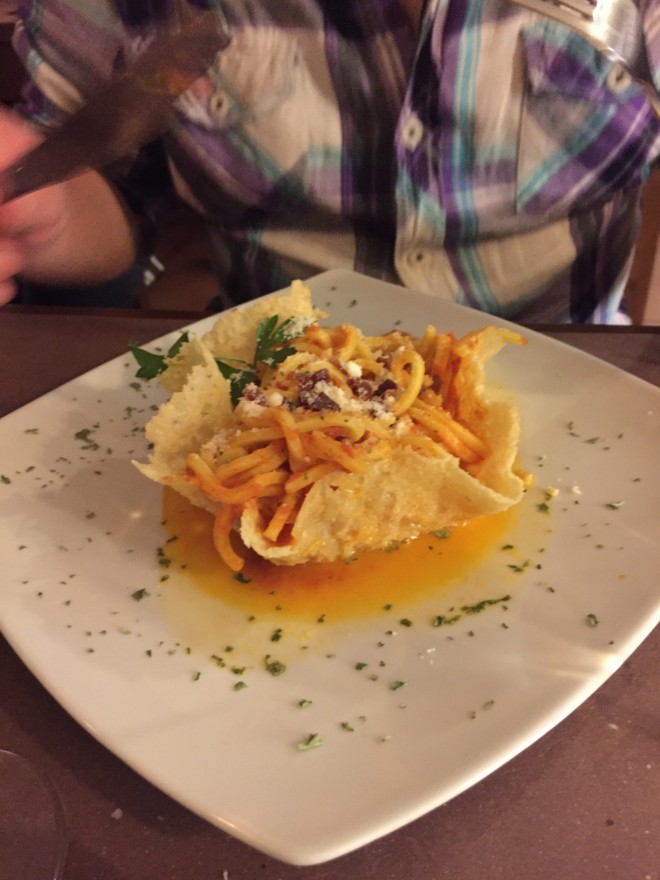 Spaghetti in a parmesan basket 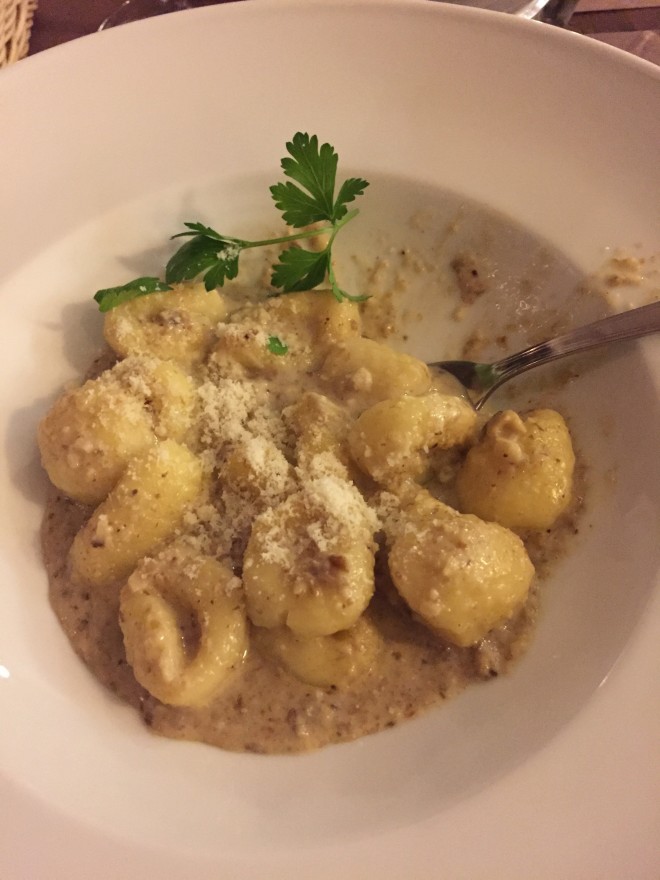 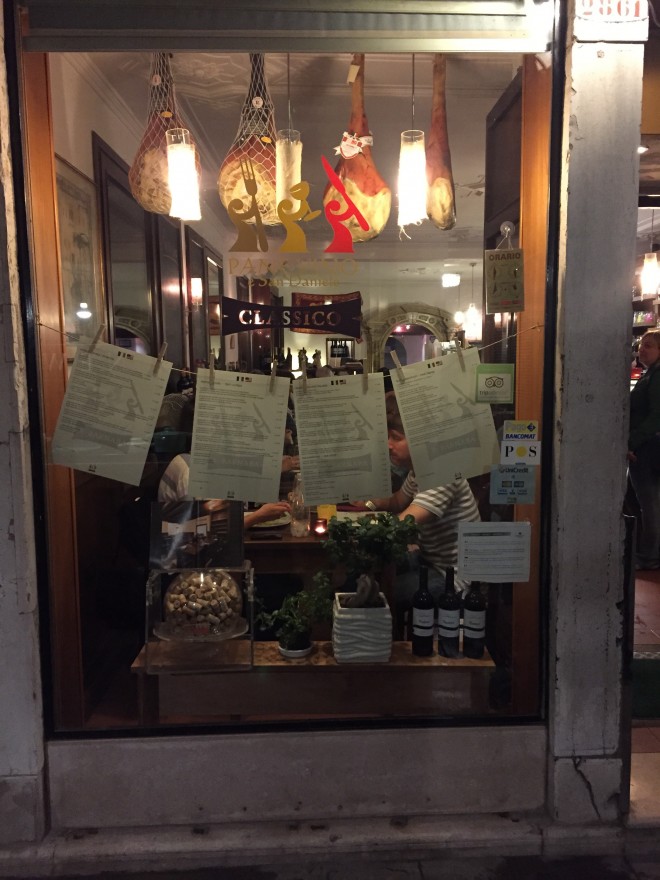 We were only staying in Venice for a couple of nights so we packed a lot into our second day there. I’m not sure what I was expecting from Venice but I found it absolutely charming. We both found that all the touristy places like Piazza San Marco, Doge Palace and the Rialto bridge were ok but the sheer volume of people let them down. At this point in time the Rialto bridge was covered in a massive advert for Diesel whilst it was being renovated and it completely ruins it as a historical landmark. What we both just loved though were all the smaller side streets, passages and canals. 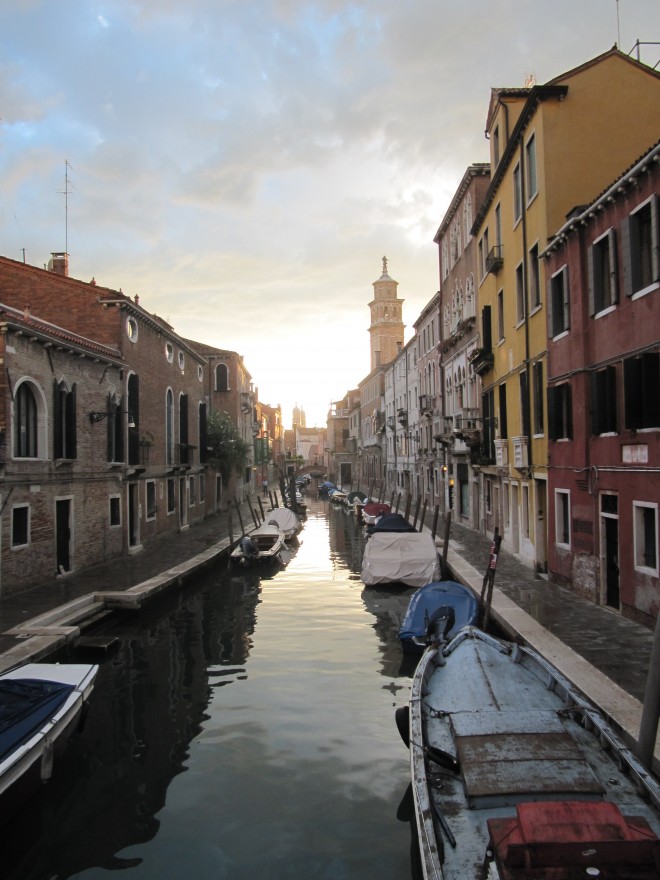 That evening we walked across to the Cannaregio district to a street that was meant to be a bit quieter than the main streets but had some lively, more local restaurants. We’d read a ‘Top 10 Restaurants in Venice’ article the day before and one of the restaurants in the list was on the Fondamenta Misericordia. We ate at the Ristorante Diana but to be honest, while it wasn’t a bad meal it just wasn’t great. We didn’t take any photos of the food, so that just goes to show it was just a bit… meh!

The following day we checked out of our little hotel and rolled (clunked) our suitcases up and down another 7/8 bridges to get to the railway station for a short trip to the mainland to pick up our car. The Creative Director was starting to get nervous about driving abroad now. (I think he was just nervous Hertz wouldn’t have the right car for us).

If you are thinking about staying in Venice I would recommend the hotel we stayed in as it was in a lovely little area, very quiet but close to shops and bars and my new favourite Supermercato – Conad! There are only 5 rooms in the Avogaria Locanda, we were in room Uno, but it was a decent size, had a massive wet room bathroom with 2 showers. The breakfast was taken in the little lobby and consisted of a good selection of pastries, cakes, cereals, yogurts and fruits. We thought it was well worth the money we paid and pretty easy to get to if you don’t mind the 10 minute walk and 7/8 bridges from Piazzale Roma.